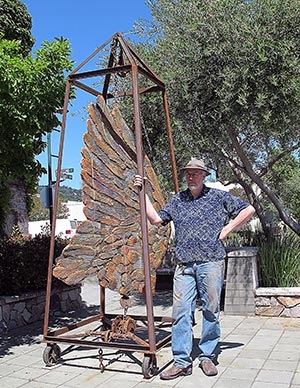 Peter Crompton and Robyn Spencer Crompton from Santa Rosa, have two sculptures on display, one in Cloverdale and the other in Geyserville as part of the 2015-2016 Sculpture Trail. The Crompton’s are a husband and wife team who collaborate on many creative projects ranging from theatre design to fine art. Peter specializes in the sculptural form and Robyn in mosaic surface design. Together they create a body of work that blends formal beauty and metaphorical power. Currently they work in concrete.

Peter and Robyn have been interested in world mythologies, and the symbolic possibilities of the human figure. They have a new series of sculptures which combines mythology with a technique of layering concrete on galvanized mesh. Only half of the mesh is covered with concrete, allowing the sculpture to become more integrated into its environment by being able to see through the sculpture. Based on the above premise, "Wing obelisk", is located in Cloverdale on Cloverdale Blvd. across from City Hall. The sculpture is 129" high by 46" wide and 46" deep. The essence of the theme for this sculpture is "sacred" geometry, specifically, the golden mean that describes aesthetically pleasing proportioning on the ratio of the parts being equal to the whole. David McChesney is the sponsor of this sculpture in memory of his wife, Beverly. 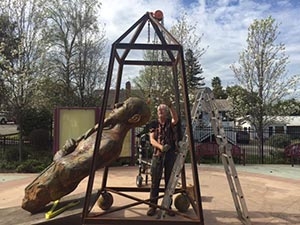 The sculpture in Geyserville is "Ptah", one of the primordial Egyptian creator gods, and also the patron god of sculptors. The sculpture is 138" high by 70" wide and 70" deep and is sponsored Mark Thayer. This unique interpretation of the Egyptian god "Ptah" can be found in the Plaza Park & Ride in Geyserville.