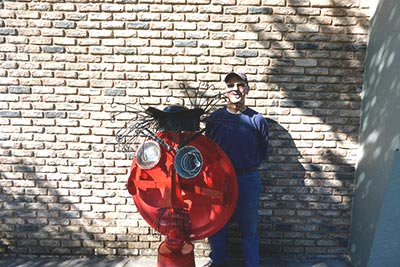 Joe has a sculpture, "One Eye Jack", in Geyserville in front of the sponsor’s business, Bosworth & Son General Store on Geyserville Blvd. It is a humorous red steel head made from old tools and equipment culled from several industries. As this piece evolved, several titles came to Joe. As he rushed to his studio to finish the sculpture by installing the second recycled parking lot light fixture/eye …. Joe dropped it! To be called "One Eye Jack". This sculpture is 60” high x 36”wide x 24” deep and is sponsored by Chris Andersen, State Farm Insurance