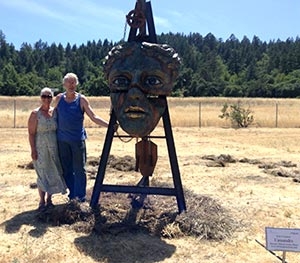 Peter Compton and Robyn Spencer Crompton are a husband and wife team who collaborate on many creative projects ranging from theatre design to fine art. Peter specializes in the sculptural form and Robyn in mosaic surface design. Together they create a body of work that blends formal beauty and metaphorical power. Currently they work in concrete.

Peter and Robyn have two sculptures in the Geyserville Trail, part of the Sculpture Trail. One is titled "Hands with Balls", located in the field at the south end of Geyserville Ave. near the entrance/exit to Highway 101. The hands embody balance, both literally and figuratively. The right hand has fragments of the celestial symbols found in palmistry, a relationship between the celestial bodies and our lives, and is based on the medieval idea, "As Above, so Below." The left hand deals with geometry and measurement. It incorporates a Vesica Piscus, a geometric shape that can generate the golden mean and a variety of interesting triangles. The right hand is 83"x39"x54" and the left hand is 41"x39"x85".

The second sculpture is "Cassandra". The face of "Cassandra" is 50"x42"x18" and was created using fortified reinforced concrete with gold leaf and mosaic eyes. Peter’s inspiration for "Cassandra" was one version of the Cassandra myth; refusing Apolo’s attempted seduction he placed a curse on Cassandra so that her predictions, although always accurate, would never be believed. The fissure between her eyes and her mouth reflects this dichotomy. "Cassandra" is located in the Geyserville Plaza Park & Ride and is sponsored by Wilson Artisan Wines.