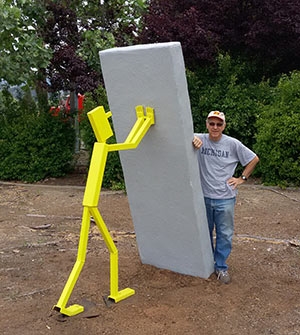 In Cloverdale Joe’s sculpture "Push Back" is located on the north side of Citrus Fair Drive near the intersection of Cloverdale Blvd. Created out of welded steel and cement plaster over rigid foam, this sculpture is 8′ high by 3′ wide and 6′ deep. The sponsors of this sculpture are Bob Scott and Tim McDonald.

According to Joe, "Good titles take time to mature. As this piece evolved, several titles came to mind, but my weakness for puns won out and "Wally" became the title for the yellow steel life-size figure holding back a tipping 8" thick concrete like wall. But as I finished the sculpture and viewed a photo of it, the realization ‘hit me’ that I probably was creating a personal statement without recognizing it at first about "pushing back". I am suggesting that sometimes you can’t stand there and just watch, doing nothing. That’s not enough. Sometimes you are obligated by your convictions to "push back" something that is just not right!"

Joe also has a sculpture. "One Eye Jack", in Geyserville in front of the sponsor’s business, Bosworth & Son General Store on Geyserville Blvd. It is a humorous red steel head made from old tools and equipment culled from several industries. As this piece evolved, several titles came to Joe. As he rushed to his studio to finish the sculpture by installing the second recycled parking lot light fixture/eye … . Joe dropped it! To be called "One Eye Jack".