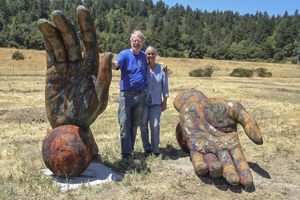 We are husband and wife team that collaborate on many creative projects ranging from theatre design to fine art. Peter specializes in the sculptural form and Robyn in mosaic surface design. Together, we aim to create a body of work that blends formal beauty and metaphorical power.

Currently, we work in concrete. It can be as solid as rock, or as malleable as mud, and can be stained, colored, and surfaced with mosaic. Plus, it has been used for over 6000 years.

You can see our work in downtown Cotati, Moshin Winery, Starlite Winery, Davero, in our studio/garden during Artrails, and at Cromptondesign.com. We are represented by Hammerfriar Gallery in Healdsburg. 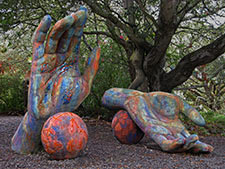 These hands embody Balance, both literally and figuratively. The right hand has fragments of the celestial symbols found in palmistry. This posits a relationship between the celestial bodies and our lives, and is based on the medieval idea: ”As above, so below”.

The left hand deals with more rational things: geometry and measurement. It incorporates a Vesica Piscus: a geometric shape that can generate the golden mean and a variety of interesting triangles
Mosaic on Fortified reinforced concrete
$8,500 each 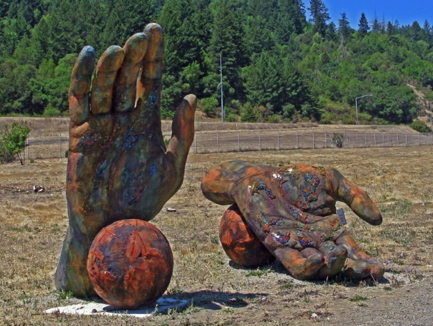 Robyn Spencer Crompton came to mosaics through what she considers the “back door”. An internationally exhibited quilt maker and theatrical costume designer, Robyn has found mosaics to offer the physical manifestation of the mythological spirit that inspires her. Her densely realized garden sculpture is created to give voice to the “mysteries of life that have no other language”.

Robyn first collaborated with her husband on “Fishboy”. Peter sculpts the forms and then together Robyn and Peter create a concrete surface strengthened with polymer fibers and additives. It is then up to Robyn to clad the forms in mosaic materials utilizing glass and found objects. To her ” it is the part I like best. Where meaningful content and glistening surfaces join elegance of form creating something significant as well as beautiful.” *

Since 1999 Robyn has taught at In the Fashion Department at Santa Rosa Junior College. She also teaches costume and makeup design at Diablo Valley College.

Her Mosaic work was recently published in “Mosaic Art and Style” by Joanne Locktov.

Peter Crompton started as a fine artist, and his paintings have been shown nationally and won many awards. He moved to Santa Rosa in 1999 he took up monumental sculpture, using the techniques and aesthetic that he learned in the theater. He and Robyn are represented by Hammerfriar gallery in Healdsburg, CA.

He tends an increasingly bizarre sculpture garden, recently featured on the HGTV program “Offbeat America” , with his wife Robyn. The garden is open every October for Artrails.

For the past 18 years Peter has made his living as a freelance theatrical scenic designer. His body of work includes Ballet, opera, musicals, contemporary and period drama, experimental works, and several world premieres. He has designed over 200 productions and worked on countless others. As one of the sought after designers in the San Francisco Bay area, He works for many Bay area companies including, Festival Opera, Opera San Jose, Marin Theater Company, Revels, Napa Valley College Lamplighters, DLOC, CCMT, Lake Tahoe Shakespeare Festival, Opera San Jose, Solano College, Jarvis Conservatory, SRT and Willows.

His work is known for it’s clever solutions and lushness of detail. He enjoys the varied collaborative aspects of theater, especially Opera. He has won Bay Area Critic’s Choice, Shellies, and many Goodman Choice awards.

For the last several years he has taught design and stagecraft at Santa Rosa Junior College Theater Arts Department, where he is also resident scenic designer. 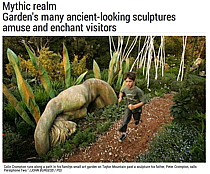 Click on the image to read about the Spencer-Crompton’s amazing garden.